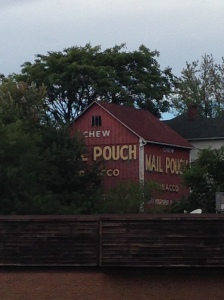 I love this photo. This building is across the street from the rooming house I’ve been staying for the past three nights. Its an old farm house that used to be out in the countryside surrounding the small town of Barnesville Ohio. As the sprawl inched down Main Street–Rite aid, Advanced AutoParts, Sav-A-Lot–the house became part of it. I found it on Airbnb–$24/night! It had ok reviews (“clean” was the key attribute I required), but anyone opting for $24/night needs to have expectations that are in accordance. This is the house below. Looks nice,

right? I’m sure it was a hundred years ago–it looks best from this distance. The door frames are so warped that none of the interior doors close. So in order to offer guests a suggestion of privacy, the bedroom and bathroom doors have those chain locks that you usually use on an exterior door to open it part way and peek out. But hey—$24/night! I’m guessing that my housemates found this place on Craig’s List–don’t seem in the usual Airbnb demographic. Three young men, probably in their mid-thirties, blue collar workers, here for a few months to work on the pipeline. I met a couple of them–polite but not too chatty. One brought his young wife. They’ve been my reliable alarm clock: thin walls, squeaky bedsprings and young passion welcome me to my day at 6:30am. In addition to these courtesy wake up calls, I have a clean room with an easy chair and TV tray, a relatively clean shared bathroom, and use of a kitchen (that is mostly piled with housemates’ dirty dishes and a few mouse droppings–so I use the fridge). No cigarette smoke. For $24/night, its perfect.

The dead people I’m trying to see on this leg of my trip are George Purcell and his family. He’s my 4th great grandfather, born in 1778 in Pennsylvania and had a farm on the steep hills north and east of Wheeling, right near the PA border. If you take a look at the map and find Wheeling WV, its up in that tiny sticky uppy part at the top of the state. Standing in Wheeling, if you stretch your arms wide, you can almost touch the borders of Ohio and Pennsylvania. Economic distress is hard to miss here now, but back in the early 1800 when George first bought land here, Wheeling was booming. Steamships and packet boats crowded the Ohio river with goods and passengers. Construction on the National Road, the first federally constructed highway, reached Wheeling in 1818. George’s land went right along side of it. West Virginia was western Virginia at this time (and until the Civil War).

George is the farthest back that I’ve been able to confidently trace on the Purcell line. 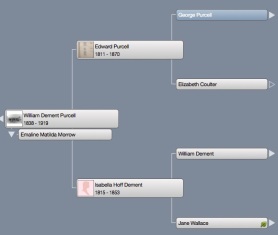 Ancestry.com is helpful but has lots of family connections without any supporting evidence. Most family trees created by individual members on Ancestry.com will link Edward Purcell back to a family in the tidewaters of Virginia–a family that first arrived in the colonies in the early to mid 1600s. There is no documentation supporting this (believe me I have searched) and once you get to know these people, it makes no sense. The early Virginia colonists were English Anglicans. Edward and his father are Presbyterian; George’s wife was born in Ireland, probably from a family from his town in Ulster. This part of western PA and a western Virginia were heavily settled by Presbyterian Ulster Scots (the “Scotch Irish”) in the mid-1700s. So these are very different people than those who colonized Virginia in the 1600s. Beside that, I found George’s will in which he names his son Edward and all of Edward’s siblings. 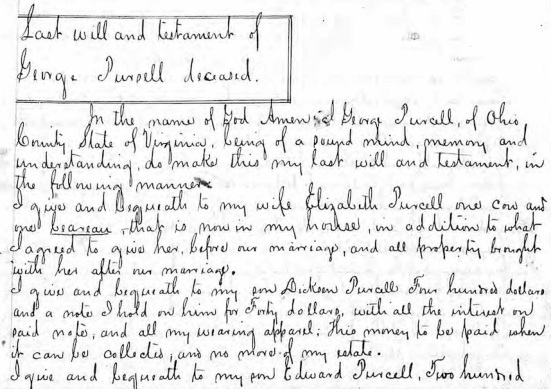 There are more interesting things in this will than I can report here (teaser for the book), but there is one bit that is a fascinating window into who George was and the time in which he lived. George died in 1855 and he makes a bequest of $50 to the Colonization Society. This was six years before the start of the Civil War. Slavery was much less common in western Virginia than in the rest of the state. While there certainly was strong morally founded abolitionist sentiment among some people in the Wheeling area, it was other geographic and cultural differences that primarily set them on the pro-Union side of the fence. The land in western VA was mountainous and not suitable for plantation crops. The people came largely from generations of tenant farmers in Ireland and Scotland. They had no affinity for the fancy pants, rich English-descended plantation owners in Eastern VA.

In the years leading up to the Civil War, the American Colonization Society was established to help freed black slaves emigrate to their “homeland.” A colony in Liberia Africa was founded and donations supported transportation by ship and resources to get the colony going. There was some support for this among freed blacks at the time. The motivations for whites was complicated and evolved over time. Some whites were motivated from a compassionate place: freed black would always be discriminated against here and would have a better opportunity to thrive in Africa. Others, particularly slave owners, saw freed blacks living among them as a threat to their livelihood–they would give their slaves “ideas.” We don’t know exactly how George Purcell felts about the issue. But he would have read this article from the Wheeling Intelligencer on 25 November, 1852 with great interest:

“For Liberia: The Baltimore American reports that the good ship Linda Stewart sailed for Liberia yesterday. She carried out 9 colored emigrants from this city and is to take on board 170 more at Norfolk, all on account of the American Colonization Society, and destined for Monrovia, Liberia. Besides emigrants, the Linda Stewart carried out as cabin passengers the Reverend Bishop Scott, Reverend W. Horn, Miss Reynolds of Methodist Episcopal Church, and Miss Preckman of Protestant Episcopal Missionary Society. The Brig, another fine vessel, will leave this port for Liberia on Wednesday or Thursday next. She will carry some forty emigrants from this state together with 5 cabin passengers from the Baptist Missionary Society. She will touch at all colonies.”

Even assuming all humanitarian motivations, the colonization of Liberia was mostly a failure that cost many lives. Most voyages were under-funded and poorly supplied, as was the colony itself. It’s an interesting point in time though, poised on the edge of the Civil War. Here is a link to a Wikipedia article if you want to know more. American Colonization Society. Beyond the issue itself, seeing this bequest for $50 tells me something about George. We can’t know his thoughts and feelings about slavery, but we know he was engaged in social and political affairs of the time. He served as an Elections Commissioner in Wheeling, so he was an active member of the community. I can see his ghost a bit more clearly.

One last bit. The big payoffs for taking trips like this is finding things in a county library that will never get scanned and put online. Case in point–I couldn’t figure out where George and others in his family were buried. Nothing in the usual sources found them. With only a couplehours left in the library, I came upon a volume entitled “West Alexander Cemetery Records.” At this point, I knew George’s farm was near there so pulled it off the shelf and opened the index. There they were! It was coming on 5pm and the rain had stopped so I headed out the old National Road from Wheeling to West Alexander PA, the very road that George would have traveled (though better paved). Its a 20 mile trek and the road cuts a narrow path through the mountains, with small towns made up of worn down trailers and clapboard houses. On my way I noticed a sign for Castleman Run–that’s where George’s farm was. I saw Atkinson’s Point Road–George’s daughter Sarah married into the Atkinson’s family; they had a farm nearby. I detoured off the road and headed up the mountain. 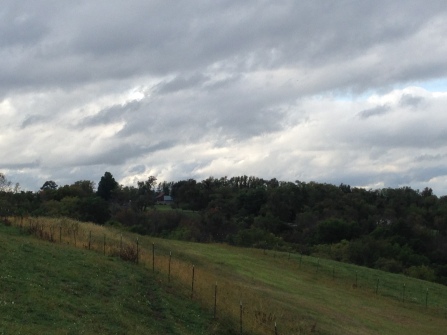 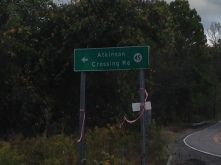 The sun was getting lower–didn’t want to get lost out in the nowhere’s of West Virginia at night, so back in the car to the cemetery. Just a stone’s throw from the WV-PA border is West Alexander and the cemetery was right there. Cemetery map in hand, I walked up the path to an older section. And there they were. George, his wife Elizabeth, his brother or maybe uncle James, three of his daughters and one son. Down the road is the West Alexander Presbyterian Church they attended (I’m sure the building is new).

Finding these graves and a few other precious tidbits made the trip worthwhile. But these little things are crack for genealogists–its never enough. One person I was really hoping to find was Isabella. Isabella Dement is my third great grandmother–she married George’s son Edward. She died here sometime between 1850 and 1853. I thought she might be buried with the other Purcells at West Alexander, but she wasn’t there. Why? I also checked her family cemetery–nope. Where is she? Her husband, Edward, left for Illinois shortly after her death. Why didn’t he have her buried with his family? 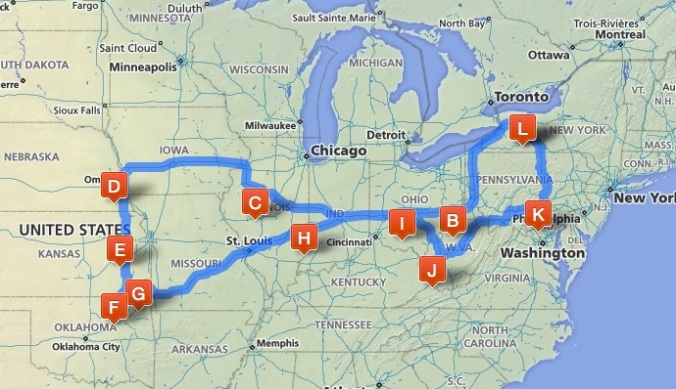 Its 5:27am. As soon as I post this I will climb into Dingleberry, my trusty brown 2007 Prius, point her westward, and take off into the heartland of America. Brilliant leaves, pumpkins, fields of golden wheat, and the deep blue skies of autumn await me.

Heading out on an open ended three thousand mile solo road trip feels incredibly exciting. I’m imagining myself starring in a great road trip movie–shot in Wes Anderson colors with a cool indie music score and witty honest dialog. The screenplay pitch for this movie would go something like:  middle aged genealogy-obsessed lady heads off on a road trip following her ancestors’ westward migration. In the car she interrogates their ghosts, trying to solve their mysteries and bring their stories to life. She meets odd but endearing characters in small rural towns and learns deep life lessons about family and journeys and what America is all about.

Meh.  Unless we could get David Lynch involved…

I have become one of those women who is obsessed with tracing family history–pouring over census documents and old wills, visiting abandoned cemeteries. Its hard to explain the fascination. A book about my mother’s side of the family that was originally going to take a few months has grown into a monster project that already passed its second birthday. This is my third trip following the trail left by long dead people who are connected to me in a pretty abstract way. But piecing together the shards of their lives is strangely compelling.

My ancestors were a restless bunch. So far I’ve traced them through the Virginia, the Carolinas, Tennessee, Louisiana, Mississippi, Oklahoma and Texas. On this trip they are taking me to West Virginia, Illinois, Kansas, and possibly back through Pennsylvania. Throw in stops in Omaha, Columbus, maybe Terre Haute along the way–because why not? I’ll be in the neighborhood

Here are a few of questions I’m hoping to answer:

So I’m resurrecting the blog again and hope some of you might find it a worthy distraction–especially some of my relatives who have probably lost faith that I will ever finish this project. I’ll fill you in on my discoveries, introduce you to some of my ghosts, and post lots of pictures of where I am.

Think I’m ready–my cooler’s packed, 32 hours of The Outlander audiobook is loaded on my iPad, and a kind and distractible friend gifted me a few Adderal for the long hauls.  Quiet on the set, places everyone…cue the soundtrack music….

See you on the road!