“Americans as a people are prone to migrate. From the earliest days at which the settlements scattered on the shores of the Atlantic were able to push their limits one mile up the rivers toward the back country the gradual movement towards the West has appropriated the land step by step until the entire expanse from coast to coast has been brought under the direct control of the race…The census of 1850 shows that of 17,737,000 free inhabitants of the United States at that date over 4,100,000 or twenty three percent had migrated from the state of their birth.”

This observation was made by historian William Pooly in 1906 in his book about the settlement of Illinois from 1830 to 1850. Two lines of my family, the Morrows and the Purcells, fit this description perfectly: they traveled hundreds of miles from the place of their birth to converge along the banks of the Illinois River between 1831 and 1851. 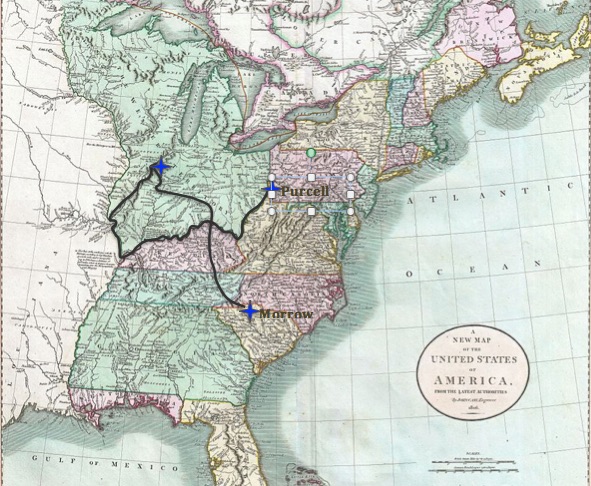 Tracing the migration paths of my ancestors gives me this creepy sense of how unlikely it is that I exist. A different decision here, a chance encounter there, and a whole different world of people come to be. So many potential universes laid out before each person in my past. In fact just yesterday my cousin and I were looking through old photos and found picture of the woman my dad was (rather seriously) dating before my mother caught his gaze. As I looked into her not-my-mother eyes, I wanted to call my mom with a sense of gratitude for her willingness to break up that relationship—Yay Mom!

It’s so tempting to feel special–the one who beat the odds and came into existence. My ancestors, and certainly my grandfather, would see this as divine pre-ordination–God chose me. I see chance: my existence is just a likely or unlikely as any other of the many, many potential offspring that could have come from these unions. It’s only the peculiarly human configuration of grey matter between my ears that makes this one outcome–me–seem important. Though my ancestors and I might disagree on the explanation, I’d like to think the feelings of awe and gratitude are similar. I feel blessed that my number came up on those many rolls of the dice. And in Peoria, the dice were being thrown by my third great grandparents.

By 1850 the Purcells were poised on the edge of change in West Virginia. Edward Purcell had married Isabelle Dement around 1833 and by this time the couple had six children who survived the perils of childhood. In my first post I suggested that Edward Purcell’s move to Illinois might have been motivated by financial and/or legal trouble. In 1844, at the age of 33, Edward was charged with counterfeiting by the state of Virginia.

This conjures up images of a shady character mass producing currency in the basement. It doesn’t appear that he served time, so I suspect he was charged with passing a fake bill or two. This period between the Revolution and the Civil War was the “golden age of counterfeiting.”  There was no standard currency; individual banks would open their doors, print currency, and promptly fail. Stores would maintain large books, updated regularly, with descriptions of fake bills known to be in circulation. In my brief perusal of the Wheeling Intelligencer for 1852 and 1852, there were several warning notices like this one:

“Counterfeit $20 bills on the state bank of Ohio Ripley branch are in circulation. The center vignette depicts a female figure with right arm resting on shield and frame…It will be well to keep a sharp lookout as it is exceedingly well executed.”

The details of Edward’s misdeeds, or alleged misdeeds, are unknown, but the court also stepped in to reconcile his debts in 1850 and 1851. So Edward definitely wasn’t riding the gravy train. People who migrate rarely are. If you are fat and happy, you stay put. Life for farmers in Wheeling had been going down the crapper for several years and as a result they were heading west. The expansion of railroads was flooding the east with cheaper products; local farmers were increasingly priced out of the market. Edwards’ older brothers and one of his sister’s families had already moved to the Peoria area by 1850.  In a small heritage museum in Princeville, Illinois I found this recollection from a family related to the Purcells–the Yates.

“In 1847 they and their families left those rugged hills to find a place where living conditions would be pleasant and the rewards of toil much more satisfactory. Reports said, too, that in the great prairies of the west land was cheap and abundant…They left Wheeling by flat boat, coming via the Ohio. Mississippi and Illinois Rivers to Peoria, then a straggling of one short street along the river bank.”

This is an engraving by Alfed Waud from the late 1800’s showing people traveling by flat boat. It’s probably a fairly accurate depiction of what that was like.  Several families in the Purcell’s circle moved to within a few miles of each other between 1847 and 1855.

Around the time of the Purcell’s move west, Isabelle died. She was around 37. Her oldest daughter Jane may have been pregnant when she died–Jane named her daughter Isabelle. I’ve still had no luck finding where Isabelle was buried. I thought maybe she made the trip to Illinois and was buried there but none of the cemetery records carry her name. It appears that the family fragmented after her death. By 1860, my 2nd great grandfather, William, and his youngest sister are living with Jane and her family in Illinois. Two other grown sisters are living nearby, but his father, Edward is mysteriously absent. He doesn’t reappear in the records until 1870 when the family is in Kansas.

William Dement Purcell, my 2nd great grandfather, grew from a teenager to young adulthood in Illinois. He served in the Union Army for a short period at the end of the war, then married Emaline Morrow, the daughter of a frontiersman. You’ll need to click on this to see his name, but here is his registration for the 86th Regiment for the Illinois Volunteer Army, in 1863. His name is the first one in the last grouping of young men in Princeville, near the bottom.

This post is already longer than I intended, but before I leave Peoria, I want to introduce you to Emaline’s father, James Edward Morrow.

Here’s the dude himself–can’t tell if he has smiling eyes or not. I like to think he does, but I’m sure he would sit me down and give me a stern talking to in a heartbeat. His family left South Carolina when he was a boy, so he spent most of his growing up years in a Daniel Boone-esque life on the frontier in Kentucky and Indiana. As a young man he settled down on the border between Akron and Princeville, just north of Peoria. On my way out of town I drove over the Spoon River and remembered that he and his wife first settled near there but packed up after suffering attacks by Black Hawk Indians. The settlers in Princeville had a more amicable relationship with Indians, so the Morrows decided to stay there. They probably didn’t travel by flat boat, but by canastota wagon–the prairie schooner.  In that same heritage museum I came across descriptions of massive examples of these wagons–really makes you think of the Winnebagos lumbering down the highway, except no TV and microwave.

James Morrow and his siblings were part of the founding of this town in the 1830s. His sister Elizabeth married Daniel Prince, who the town is named after.  So in contrast to the Purcells, it was easy to find information about them.  Here is a map that shows the Morrows land–it’s not a great picture so you’ll need to click on it to get a good look.  Their property is in the upper left quadrant (BTW: if you notice E. Purcell on this map, it’s not my Edward, unfortunately. Not sure how related but he’s tricked me on a couple occasions in my search). 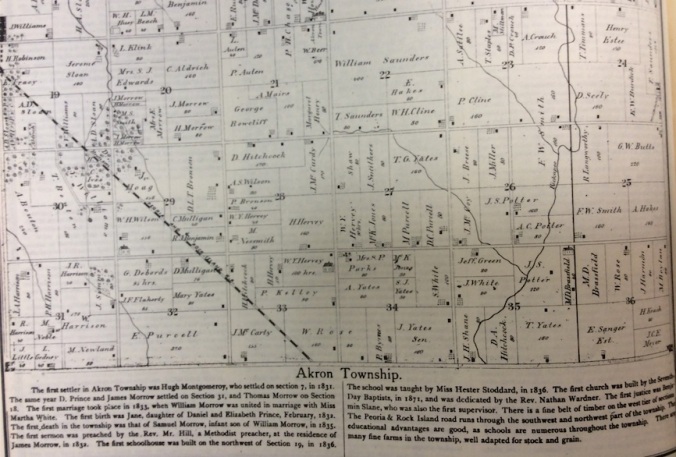 A short biography about James Morrow written in 1874 said, “He has always been a farmer, and has never rode on the cars nor seen a steam engine. To do right has been his rule of life.”  Sounds like an upright guy.

Wrapping up here, I want to tell you about my three night Airbnb stay in Peoria. I stayed in a small apartment with a very sweet and generous couple in their late 20’s: Celia and Subrat. She is Chinese, from northern China near the North Korean border, and he is from Indore, India. They met on the first day of a Master’s program in Mechanical Engineering at SUNY Stonybrook, and promptly fell in love. Now, two years later, they both have jobs working for Caterpillar in Peoria. I asked them if they plan to marry. Being a little familiar with Indian and Chinese cultures I know that (a) this is not a rude question, and (b) this is a very complicated situation for them. 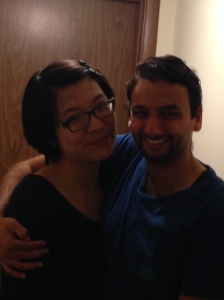 A 28 year old single woman in China would be written off as too old to ever find a partner. Celia figures that when she tells her mother about Subrat, her mother will be so happy that Celia found someone to marry that she won’t object too much. Subrat has told his family and they are distraught and insist that he break off the relationship. He comes from a Jain family (a small ancient religious sect that tends to keep itself closed off culturally–somewhat similar to Orthodox Jewish communities here). He is the oldest son and his parents cannot accept this rejection of their culture and tradition. But Subrat and Celia are adorably in love and plan to marry. I can’t help thinking of their future children, tracing a map to see the thousands of miles their parents traveled to meet in Long Island. Maybe they will marvel at how unlikely it is that they exist–how they too beat the long odds.

After a weekend break in Omaha with cousins, I will be following William and Emaline to Kansas. Hoping to find Edward’s grave–he’s got to be buried somewhere there. And hoping to learn more about how this generation of Purcells live on the Kansas prairie. 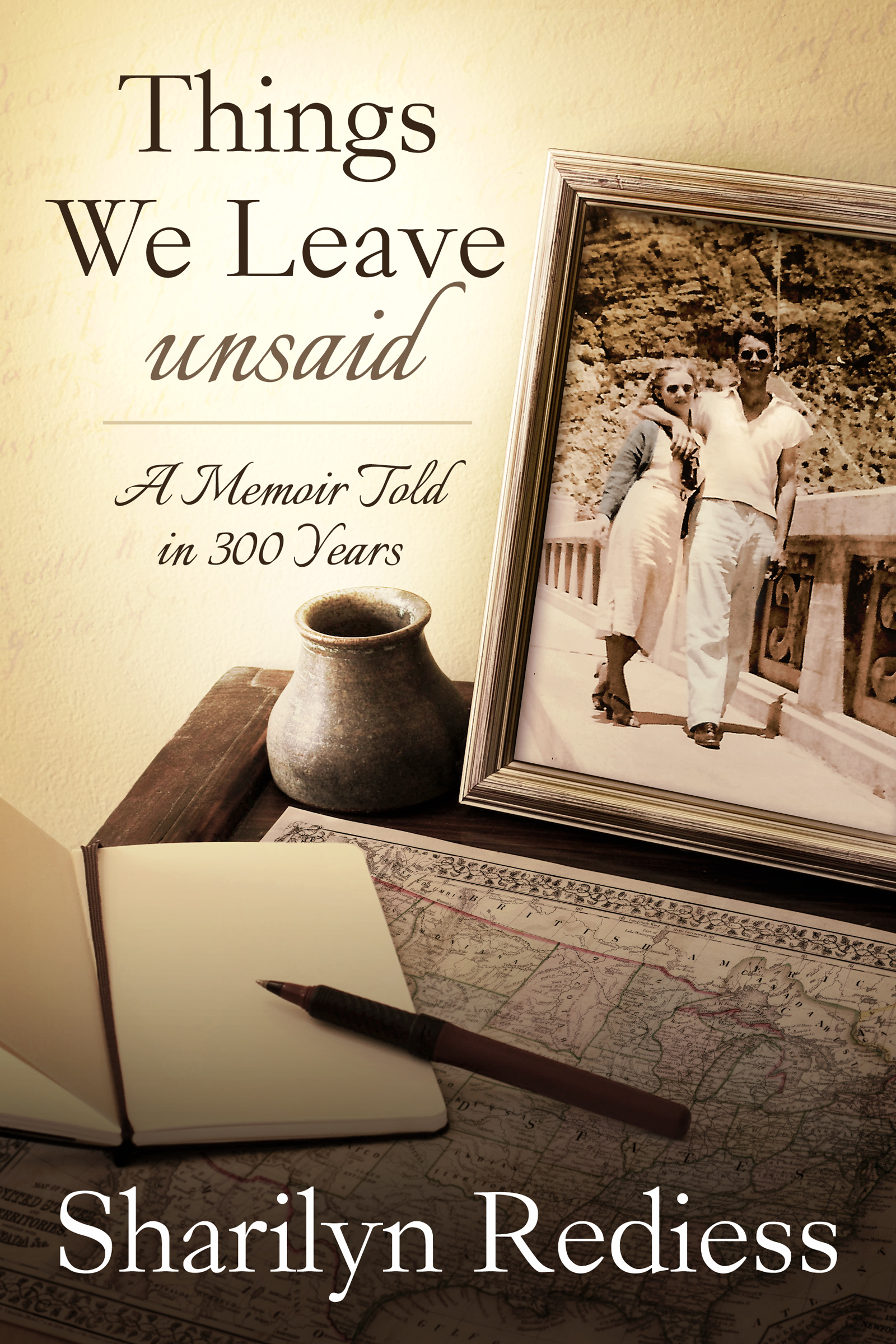